Over the winter, we got an e-mail notifying us that it was time to sign up our 8-year-old son Michael for “pre-travel” soccer, a required program should he want to participate in travel soccer in our town in 3rd grade.

We asked Michael if he wanted to participate. Nope. Told him that all of his friends were doing it. Still no. Explained to him that if he decided later that he wanted to try out for travel for the fall and didn’t do this program, that it would be too late. No again. Reiterated that if he changed his mind halfway through the spring and wanted to join his friends, that he couldn’t change his mind. No, no, no.

So we signed him up.

In our defense, he’s 8 years old, and 8-year-olds can be pretty fickle characters. We really didn’t want to chance that he’d change his mind, because there would be nothing we could do about it.

And what happened? He almost always gave me a hard time about going, To our credit, when he did go, he enjoyed it, but when he wasn’t there, he told us he didn’t like it. I don’t think he enjoyed the serious level of competition (there were more than 100 boys there, being trained and evaluated by international soccer players for about 50 slots on the town’s travel teams). He said that he just wanted to play soccer, and this was, understandably, lots of drills. By the end, when Michael was justifiably arguing that HE never wanted to do this program, and that WE signed him up for it, we let him skip a bunch off the twice-weekly sessions. 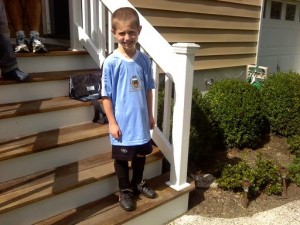 We found out last night that, no surprise, Michael didn’t make any of the travel teams. All of his good friends who participated did. And while Michael seemed happy for his friends who got onto a team they really wanted to be on, he was incredibly happy for himself that he didn’t make it.

I guess sometimes kids really DO know what they want, and we have to figure out when we know better than they do, and when we should just shut up and listen.