Before we get started, I have a confession to make. I wanted girls.

I think I’ve mentioned this to you. I didn’t want boys because I have anything against them; it’s just that, you know, I’m a girl, and growing up I really didn’t have a lot of friends who were boys.  I was a pretty stereotypical girl, playing with dolls and makeup, so I think I assumed that I’d have girls, because that’s what I knew.

Someone had a different plan.

I realized that the first time I changed a diaper and had to clean pee off a wall. Seriously, I don’t think I even realized that was possible, but there I was. I’m fairly certain one of you still holds the record for the number of times a baby has peed on the wall in our pediatrician’s office in one visit. Three.

But aside from what I consider to be the sometimes quirky differences between sons and daughters, I couldn’t be happier with my two boys, and realized that we were all meant to be together. 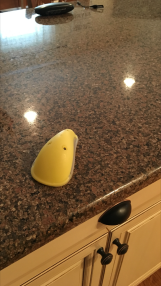 When I came downstairs after one of you returned from a baseball game, and I found – gasp! – a cup sitting on the kitchen island. Where I was about to make your lunch for the next day. Why? There are so many other places you could put it – your room, the bathroom, even your bed, or, you know, the bin in your room designated for all of your sports equipment. And I hate to admit this, but yesterday was not the first time I found your cup in the kitchen. And I’ve talked to other moms of boys about this, and I know you’re not the only boy who has done this.

I’ve seen other things too — the stuff of nightmares.

I’ve seen our dog ripping apart a small pile of the tissues you used when you had a terrible cold. Because for whatever reason, these tissues didn’t quite make it into the garbage.

I’ve seen you pick up a half eaten jellybean off the basement floor. And eat it.

I’ve seen you stuff the strings of your hoodie into your mouth.

I’ve seen you take dirty laundry out of a hamper to wear it. Because my usual 24- to 48-hour laundry turnaround wasn’t quite speedy enough for you.

I’ve seen you wipe your nose on a sleeve. On a clean towel. On me.

But you know what. I still wouldn’t trade either of you for anything. I can’t believe how much I love you both — more every day. You’re some pretty amazing kids.

But please. Put the cup away.