Back when Michael was about a year old and Matthew was about 5, one day every weekend, Dave would join Michael for his afternoon nap, and Matthew and I would head out for lunch at the diner in town.  I think because he was 5, Matthew liked to sit at the counter, so we always did.  As a mom adjusting to having two kids after more than 3 1/2 years of just one, I remember these times alone with Matthew fondly.

As the boys got bigger, they got busier, and activities and the precious little family time we had took over the weekends.  Michael stopped napping (Dave didn’t, by the way, so sometimes it’s just the boys and me out and about). The weekly lunches, just Matthew and me, became a fond memory.

Earlier this school year, Matthew was working on a project for health class, where we each had to write down some memories and talk to each other about them.  Not only did he mention those times out just the two of us, but wrote that he wished we could do it again.  So we talked about it and decided we would find a way to make it happen.

This year, on Sunday mornings, Dave plays basketball with a bunch of other middle-aged guys.  And Michael goes to religious school on Sunday mornings (this year, Matthew goes on Tuesday evenings).  That just leaves Matthew and me.  He liked the idea of us trying to go out for breakfast, just the two of us, on Sunday mornings.  For nostalgia’s sake, we went back to the diner in town the first time, and sat at the counter. 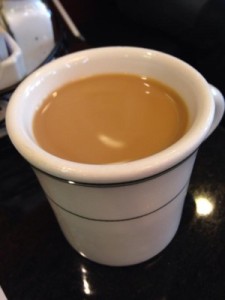 It was good, but neither of us seemed too excited about trying to do that every week.  So we decided we’d try some new diners (which, thankfully, are plentiful, given that we live in suburban New Jersey).  I personally added some criteria – the diner needs to have at least 3.5 stars on Yelp, and be within a 10-15 minute drive.  We’ve tried some new places, eaten some pretty delicious food, talked to some interesting people, seen some fascinating characters, and had some good conversation.  Aside from a diner check-in on Facebook (and Googling something that comes up in conversation if necessary), electronics are away.

Things have gotten in the way and we haven’t done it every week. That’s okay.  It has to be.  But it’s been a great way for me and my soon-to-be teenager to spend a few hours most Sunday mornings, just the two of us.